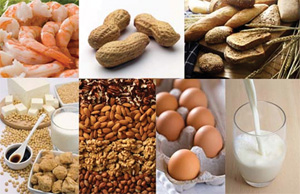 Are food and environmental allergies playing a role?

Eosinophilic esophagitis (EoE) is a very recently identified allergic and immunologic condition. In EoE, a type of white blood cell (eosinophil) accumulates in the lining of the food canal (esophagus), that connects mouth to stomach. This accumulation could be a reaction to foods, allergens or acid reflux and causes injury and swelling of the esophagus. Swollen and damaged esophageal tissue can lead to difficulty swallowing or cause food to get stuck during swallowing. Normally there should be no eosinophils in the esophagus. Hence, build up of these white cells (eosinophils) in esophagus is the trigger for this disease. EoE can occur at any age and most commonly occurs in Caucasian males.

Symptoms of EoE vary with age.

Diagnosing Eosinophilic Esophagitis is the key to correct treatment. Gastroenterologists, pathologists and allergist work together to help diagnose EoE. Currently the only way to diagnose EoE is with an endoscopy (non-surgical procedure to look inside the digestive tract) and biopsy (tissue samples are taken) of the esophagus. Careful evaluation of tissue samples is conducted by a pathologist to look for the number and density of the eosinophils. Majority of patients with Eosinophilic Esophagitis are atopic. A person with family history of allergies or asthma OR symptoms of one or more allergic disorders, like asthma, allergic rhinitis, atopic dermatitis and food allergy, is at higher risk to have EoE. However, EoE has also been shown to occur in other family members. Eosinophilic Esophagitis can be associated with environmental and food allergies. Eosinophilic Esophagitis and Environmental Allergies: Environmental allergies to allergens such as dust mites, animals, pollen and molds can play a role in EoE. For some patients, it may seem like their EoE is worse during pollen seasons. Allergy testing for these common environmental allergies is often part of the EoE evaluation. Eosinophilic Esophagitis and Food Allergies: Untoward immune responses to food have known to be the main cause of EoE in a large number of patients. Relationship between food allergy and EoE is complex. It is difficult to establish the role of foods since the reactions are slower and so a single food is hard to pinpoint as the trigger. Allergists conduct allergy tests to identify the foods causing EoE. Once the “culprit” foods have been identified and removed from a person’s diet, symptoms generally improve in a few weeks. Working with doctors (allergist, gastroenterologist and dietitian) is vital. EoE is a complex disorder. Hence, it’s important to listen to your gastroenterologist and allergist for instructions on managing EoE. A board-certified allergist/immunologist can help you manage related atopic disorders like asthma, atopic dermatitis, food allergy and allergic rhinitis. Diagnosis of EoE can be overwhelming. Let us help you. Call 208-377-4000 or fill our online appointment form to schedule an appointment at The Allergy Group.