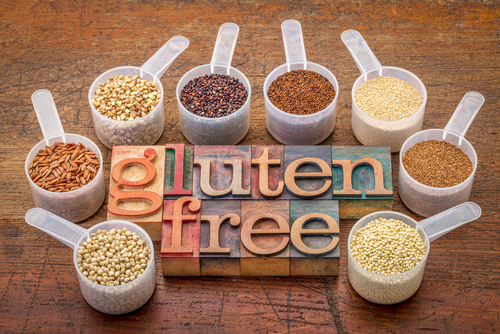 Gluten is a protein, found in wheat, barley, oats and rye. It’s not “glue,” although the protein derives its name from the word glue, and it doesn’t “stick” to the intestines like glue either. Gluten sensitivity, also known as celiac disease, is a condition where the lining of your small intestine becomes inflamed and damaged after it’s exposed to gluten, making it harder for your body to absorb nutrients.

This leads to malnutrition and weight loss. Studies show that it’s a fairly common problem, affecting about 1 percent of the population. It can occur at almost any age, with 45 being the most common age at which the condition is diagnosed. The common symptoms are abdominal pain, diarrhea, bloating and weight loss. It can be associated with anemia, fatigue and a skin rash as well. All the symptoms improve on a gluten-free diet.

Testing for celiac disease is fairly straightforward. Blood tests for certain specific antibodies and a biopsy of the small intestine have a 99-100 percent rate in making the diagnosis. The important thing to realize about these tests is this — if they are negative, you don’t have the disease. There are few conditions in the entire world of medicine that have such highly accurate and reliable tests available to diagnose them.

This brings us to the burning question: What if you have tested negative for celiac disease, but you still feel a lot better when you avoid gluten. Should you be avoiding it forever? The answer is — if you want to. It’s still not well understood as to why some patients feel better without gluten — even though they don’t have celiac disease. The good news for such people is that they are not likely to suffer from the complications of celiac disease, such as malnutrition, anemia, bone loss and an increased risk of cancer. Their family members also don’t have a higher risk for developing celiac disease either.

But being on a gluten-free diet can be quite onerous and expensive. Gluten is present in a wide variety of foods, because wheat flour is used widely in the food industry as a thickener and filler for many commercial products. It’s present in most precooked meals, ice cream, sausages, processed meats, cheese, salad dressings, soups, sauces, seasonings and even some medications and vitamins.

Gluten is also present in most beers, candy, drink mixes, lipstick and lip balms, cosmetic products, play doughs and even in toothpaste. Furthermore, grains that are gluten-free — such as rice, corn and soybeans — can often get contaminated with gluten when mills use the same production lines to process both gluten-free and gluten-containing foods. It’s therefore important to read the label carefully before consuming almost anything.

Being gluten-free also can present you with some social liabilities when it comes to dining out, attending parties and the like. It’s also not a “healthier alternative” to a gluten-containing diet. It should not be undertaken casually or just as a “trial.” A gluten-free diet often contains inadequate amounts of iron, vitamins B and D and calcium.

Special care should be taken to ensure these nutritional deficiencies don’t develop in someone on a gluten-free diet. It’s a diet that’s also often deficient in fiber and can lead to constipation. My recommendation: If you think you are sensitive to gluten, get formally tested. If the tests are negative, going gluten-free should be a carefully thought-out decision. It should be based on your symptoms, but please be aware of the pitfalls of the gluten-free diet. Being “gluten-free” may not be as cool as you think it is.